Certificate Chains, Amazon EC2, and You!

Are you getting https sec_error_unknown_issuer Error in Firefox? Did you add https at your EC2 Load Balancer? Well then Amazon lied to you.

We just dealt with a really frustrating error over at WebKite. Our site was suddenly broken with a bad ssl certificate, but only on Firefox. To make matters more confusing, things worked fine on all our Firefox installs in the office, but only blew up on clean installs.

If you’re reading this, and you’re seeing a (Error code: sec_error_unknown_issuer) in Firefox, and you’re hosting your site on EC2, then I can hopefully help you out. 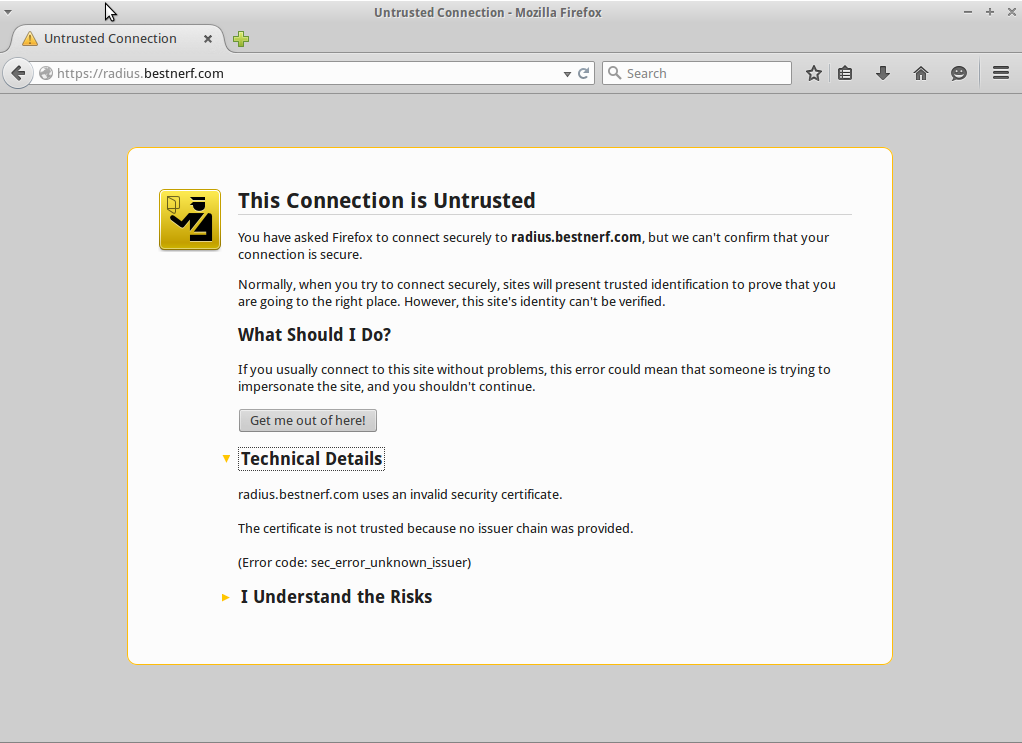 TLDR: Amazon Lied to You When They Said the Certificate Chain Was Optional

Well I don’t know if I’d say they lied exactly, but at the time we set up the new certificate in the EC2 dashboard, Amazon showed us this: 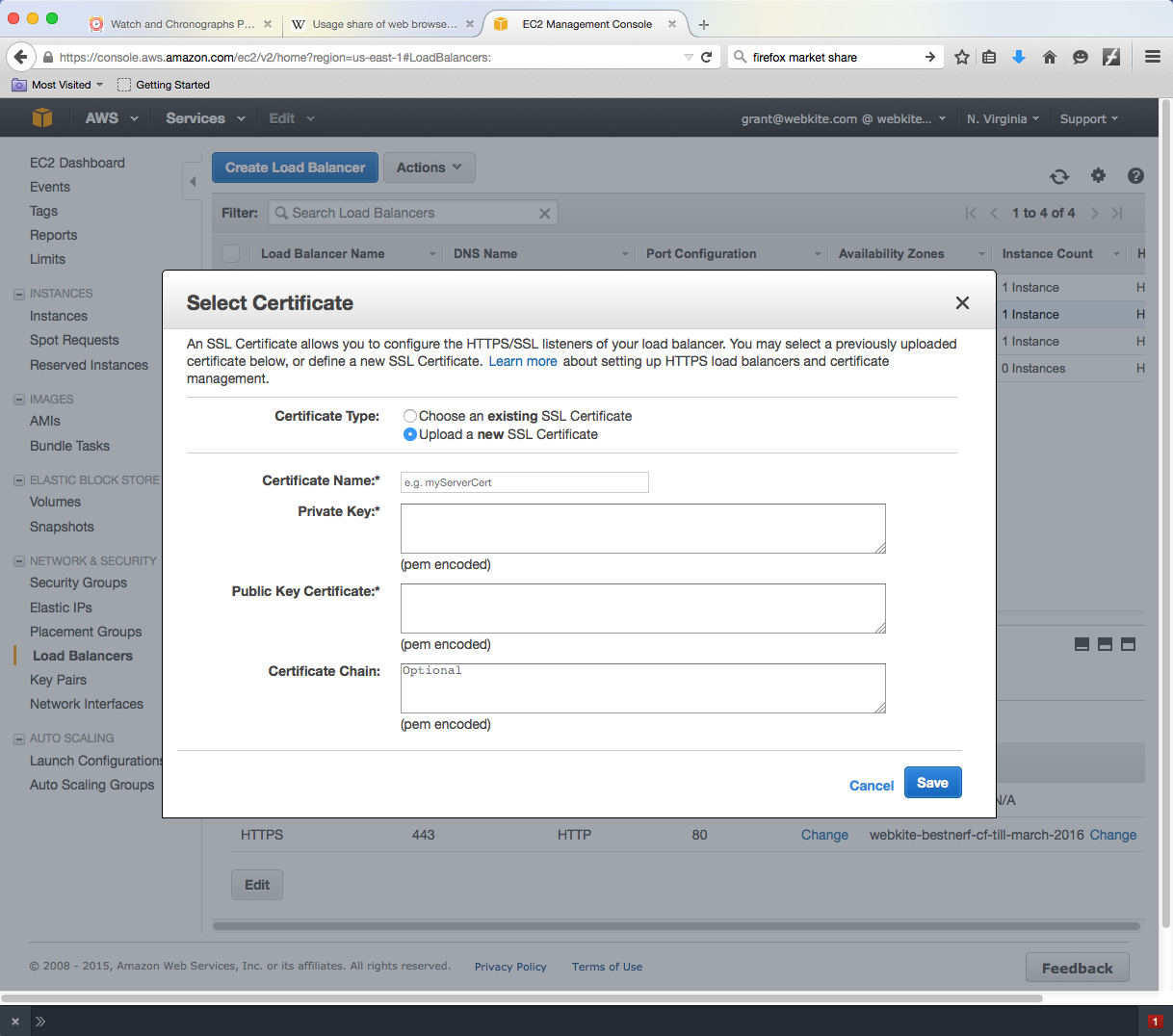 What is the certificate chain?

I’ve said it before and I’ll say it again: Crypto is easy, authentication is hard.

It’s easy enough to encrypt browser connections so that nobody can read the traffic going on between you and a server when you, for example, send them your credit card number or social security number or mothers maiden name. But you need some method of authenticating the encryption keys so you know that they belong to the server you’re talking to, and not a hacker or government agency trying to snoop on you. That is: You need to trust the encryption keys you’re using to be able to trust the safety of your encrypted communication, by authenticating them as valid and from a trusted source. If you can’t do that, the green lock on your browser means nothing.

https solves this problem with Certificate Authorities. These are authorities who are trusted to vouch for other certificates by signing them. A browser or other consumer of https decides which authorities it trusts. This initial trust is written in stone. Although some certifications are performed, from the perspective of you the user sitting on your computer, these CAs are trusted because Firefox says they’re trusted, and that’s all that you need to know. In that sense that really makes your browser the ultimate authority, and then it delegates that authority to the various root certificates of Certificate Authorities that it trusts.

These root certificates then vouch for other sub-authorities. There are several reasons to do this, but as a security concern it allows you to compartmentalize damage if part of the system is compromised. That brings us to the real-world analogy I like to use to explain the system of trust I’ve already hinted at by calling it vouching:

Organized crime. A mob boss has lieutenants who work for him. These lieutenants have their crews. These crews might have people working for them. Each step along the way, introductions are made by vouching for someone. You might tell your boss, “I know a guy. He’s a good guy. We can trust him.” and your buddy joins the crew. The mob boss doesn’t need to know about your buddy at all, but if the system has integrity, starting with the mob boss and working the way down, you’ve established a chain of trust that leads all the way down to you from an undisputed authoritative source. Now if the system doesn’t have integrity, and your boss is a rat, you all get killed, but the rest of the system and trust is still in place. And the big boss doesn’t need to know about the intimate details of things going on 3 levels underneath him to maintain the integrity of the system.

So back to the browser, it has several (actually hundreds) of lieutenants who vouch for encryption keys. Someone else has vouched for your encryption key. You’re just not important enough to get to meet the big bad CAs themselves. An indeterminate number of layers between the root certificate and your certificate create a chain of trust that can be followed all the way from the big boss to little old you. This is the certificate chain.

Why didn’t this break on company computers?

Without that chain of trust, things should have blown up everywhere. But they didn’t. They were working just fine on our machines. This was particularly annoying because I use Firefox every day, but it wasn’t broken on my machine. If it had been a Chrome or Safari issue another coworker would have caught the error as well. But we were all working blissfully unaware of the problem until I fired up my backup laptop to do deploy a quick hotfix at home.

This bothered us enough that we decided to reproduce the error in staging. We:

Boom! Things were broken on previously working machines. So the site would work for people using Firefox, but only if they had previously accessed the site for the first time after we updated our certificate. But that’s still ~11% of web users. Ugh!

I originally thought that a new version of Firefox had locked down SSL security settings. But now I don’t believe that. I was making things more complicated than they were. My current unproven working theory:

Back to the organized crime example: Someone tells you, “Hey this is my buddy Vladimir. You guys should talk. I think you could do some good for each other.” You reply, “Vladimir? We go way back. Remember that thing? No the other thing. Yeah, yeah, good times!” There’s no need to re-establish trust for someone you’ve already decided is trustworthy.

Some warning signs in retrospect

Here are some things that should have tipped us off to the problem in advance. They seem like obvious warning signs after the fact, but you know what they say about hindsight.

Why didn’t the other browsers complain?

Good question. Firefox has been getting much more strict on these sorts of validations and the process of vouching. In fact, not only did Chrome refuse to complain here, it refused to complain when our ssl certificates on staging expired unexpectedly! That’s right. The certificates were expired and invalid and Chrome kept loading the site without complaining.

As some of my previous blog posts and work have explained, I’m not a huge proponent of the Certificate Authority model, but if you’re going to do it you should do it right. If not, you might as well start trusting self-signed certificates in the browser. A certificate is only valid if you can validate all the certifications all the way up to one that you trust, including things like expiration date and the general authenticity of each signing certificate.

Back to the (growing tired and old) analogy, a stranger walks up to you on the street and tells you his friend Eve is a great safecracker. Why would you trust Eve? You wouldn’t. (Unknown chain.) Or what about the same from your friend Pedro you haven’t seen in 15 years? Even though he’s never done you wrong, some time might cause your trust to expire. (Expired signing certificate.)

I’m a bit curious if our problem was unique, or if a lot of sites are blowing up because they weren’t configured in a way that worked with the newest versions of Firefox. If you encountered this problem, or a similar one that wasn’t directly related to EC2, please shoot me an email.