Now that my software is in good shape and I can easily test out the can crusher, I’m starting to see a lot of problems with the initial design. This is expected. I just dove in and built the first prototype without much analysis. It’s time to take another pass on the mechanical design and get things whipped in to shape.

Let’s take a look one problem at a time:

The Can Will Pop Out of the Device

The first problem was relatively simple. When the crushing element applied pressure to the can it could come flying out of the front of the device!

The fix: I made a tray that holds the can. 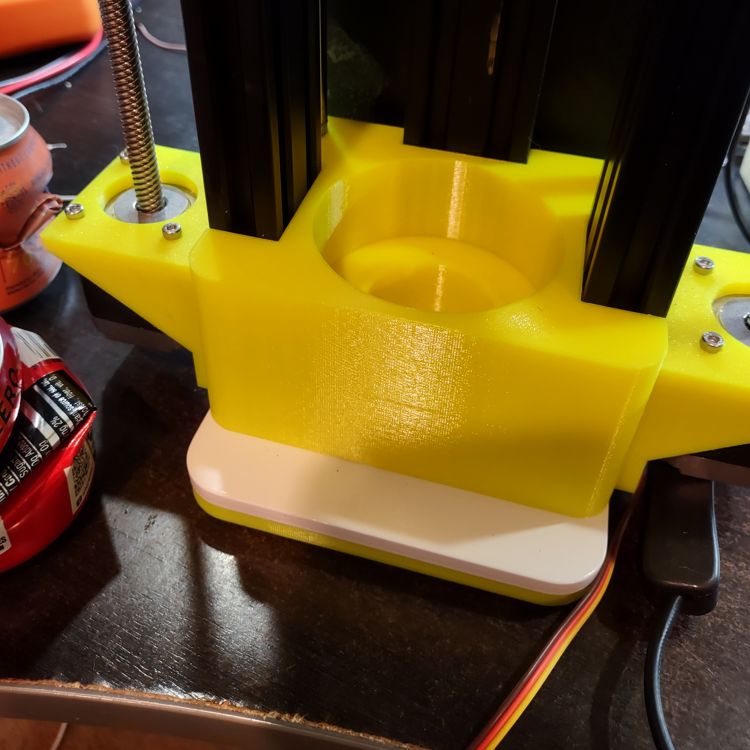 Acrylic Structural Elements Still Have Too Much Flex

The next problem was that the acrylic still flexed a lot when pressure was applied to the can to crush it. It was much, much more rigid than a 3D print would be, but it was flexing enough to cause problems with the lead screws.

The fix: I got the structural elements made out of 1/4 inch thick laser cut aircraft aluminum.

I’d never done this before but decided to give OSHCut a try. I’ve always felt guilty for not using their sister service OSH Park to get my PCBs made, but the bids always ended up being an order of magnitude higher than the Chinese PCB vendors. OSHCut worked great! They have a nice site where you can drop in a .step file and get an instant quote. This is great if you’re like me and don’t know what the hell you’re doing. Other companies wanted me to talk to an engineer without even a ballpark quote!

The price here was a little at the high end for a hobbiest project and will probably be out of some people’s budgets. For the frame top and bottom, and crusher element I probably needed a 9 inch by 9 inch piece of stock. They have a back-of-the-line price that means it takes a few weeks to get your parts, vs 2 or 3 times as much to start production the next day. Great for someone on a hobby budget. Still, at $126 for a single run, this will probably be the single most expensive part of my project. But at this point I’m committed to getting results.

That price would be frustrating if I ordered something and I got the dimensions wrong and it was unusable and needed to order again. If I want to do aluminum parts in the future I think I’ll probably still do a test run on the CNC with cast Acrylic first, and make sure it’s perfect before risking a bad run on the laser cut aluminum. 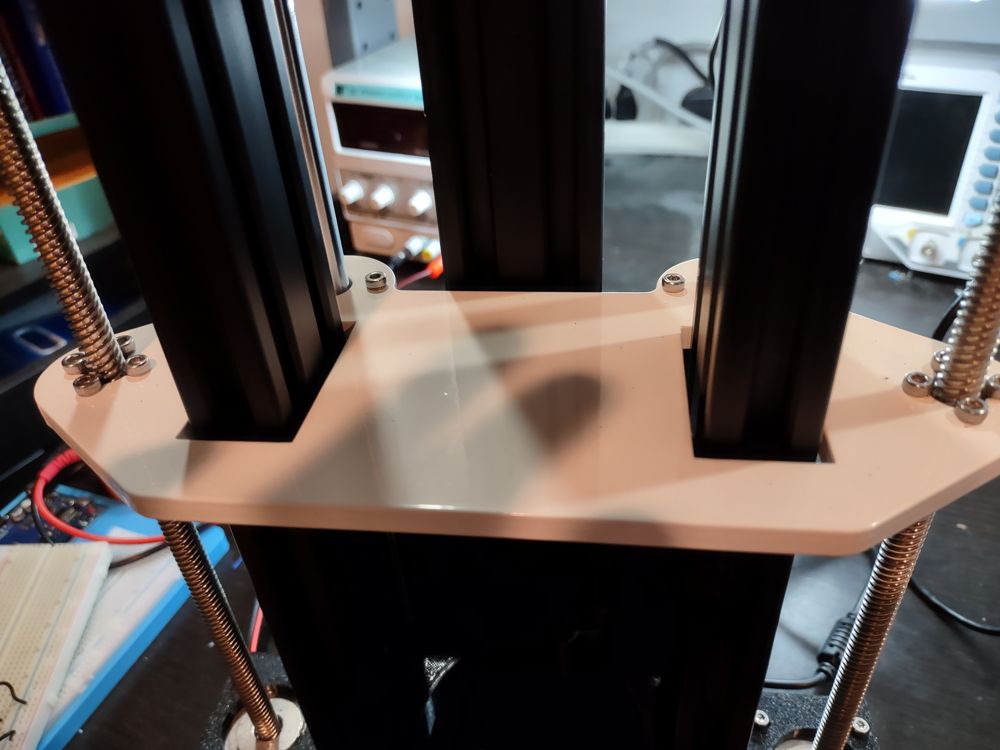 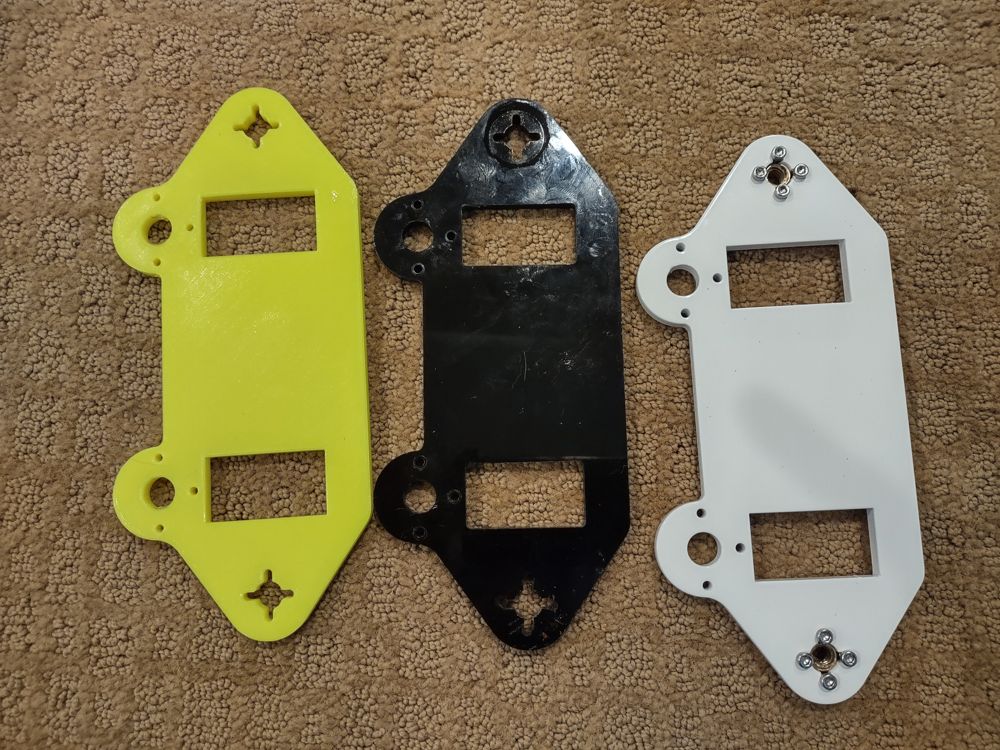 After getting a solid platform that was didn’t flex, the next problem was that I didn’t have nearly enough crushing force. I expected things to be difficult, and anticipated having to add something the crushes the can sidewalls before applying pressure from the top. But even a can partially crushed by hand wasn’t getting anywhere.

One option to fix this would be to just buy bigger an bigger stepper motors until we had power. I’m currently using NEMA 17 sized motors. But that seemed a bit excessive.

After some research I learned about the different threading available on lead screws.

The More You Know…™

I was always confused that these lead screws were referred to as trapezoidal when they are clearly round. It turns out this refers to the shape of the thread. Rather than coming to a sharp point like a normal screw these are flattened for a good amount of the thread. 1 mm on my 2 mm threads. This creates a more robust mating with the nut that moves the platform up and down. 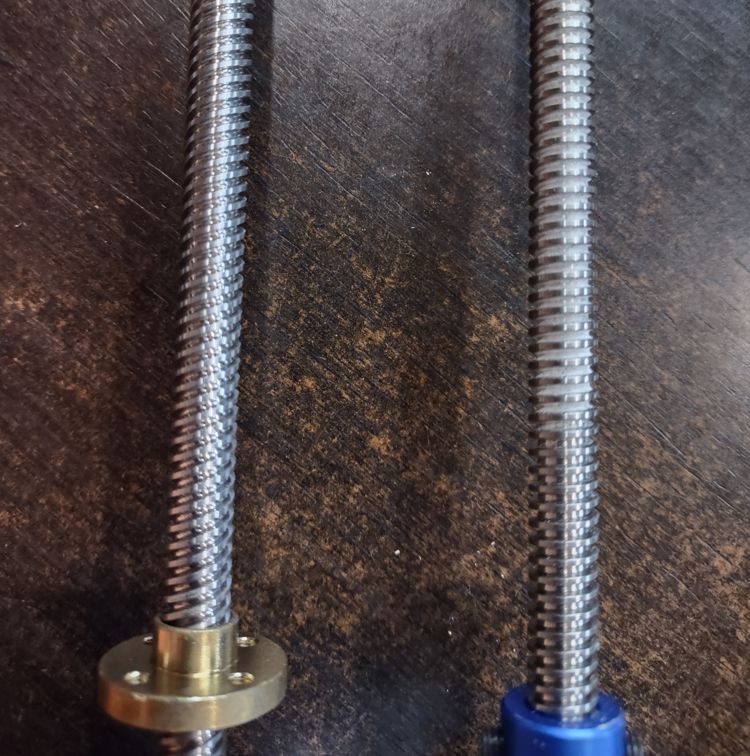 My normal 3D printer lead screws had a 2mm pitch, but they had 4 ‘starts’. This means there are 4 sets of threads instead of 1 like a normal screw. Each of the thread are intertwined like the stripes on a candy cane. (Not sure if that analogy is useful?) So a single rotation of the stepper motor causes the screws to move the platform up or down 8 mm instead of 2. They do however sell lead screws with 1,2, or sometimes even 3 ‘starts’. I was able to buy some screws with a single start, meaning a rotation now moves the platform 2 mm.

This should give 4 times the force from the same motors, with the downside being that the crusher element moves at 1/4 the speed. Installing these finally got me to my first crush of a can that was even close to acceptable! If I want to get even more power there are screws with a 1mm lead.

Note the image on the right. These rods have the same thread size, but the one on the left has a steeper angle. This means it has more starts and goes further per revolution.

The Crushing Platform Has Many Alignment Problems 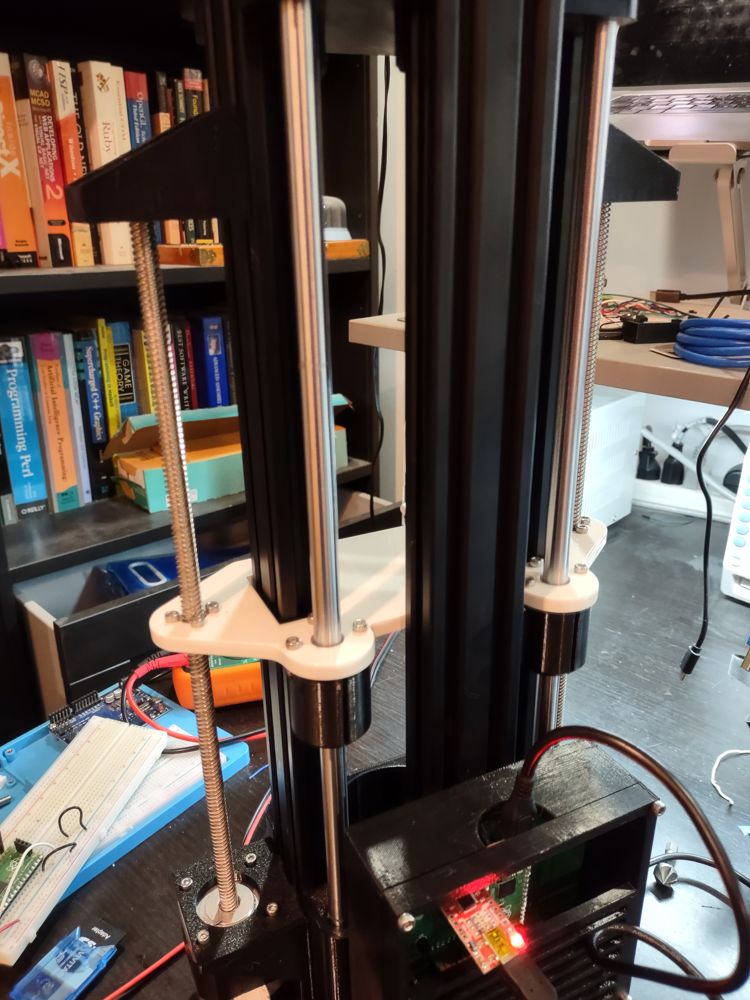 The next problem was that the crushing power would often cause the screws to come out of alignment, and caused the crusher element to stop being level. With the 2 mm screws this would become so severe the system would bind. On the 8 mm screws I could power down the stepper motors and spin the screws manually to re-level the element. But with the 2 mm screws I had to actually remove the steppers from there holders to release enough stress to allow me to align things several times. That’s obviously not going to work.

One design element on my 3D printers started making a lot more sense. The higher end ones have straight rods of hardened steel that guide and align the parts. Bearings reduce friction. The screws then have a lot more leeway in terms of their positioning. They are moving the platform up and down, but they are no longer responsible for part alignment.

I added a straight rod on each side on the back of the structure. Then I 3D printed out some holders for some vertical bearings. This meant that I needed a new crusher element that didn’t interfere with the rods and had mounting holes for the bearing holders.

Which unfortunately meant another order from OSHCut a week after the first batch came in! After some test 3D prints and acrylic, I was back to OSHCut for a redux in aircraft aluminum.

The Lead Screws Have Alignment Problems

The last big problem was that it was difficult to get proper alignment of the lead screws. I imagine this was always a problem, but it was particularly obvious once the straight rods were helping keep the platform straight.

As I moved down the platform it would get harder to spin the lead screws. Just a little bit on most of the way down, but it got especially hard at the very bottom. This was a big problem because my stepper drivers use current values to determine if they have stalled out. The difference was enough that the value changed depending on whether I was at the bottom of the platform, in the middle or at the top, making it impossible to do stall detection or auto-home reliably.

I was getting in to an issue where we were dealing with tight tolerances. It seemed like I was < 0.5 mm from getting the lead screws straight. I could have kept moving things around just a little, printing, and testing the range of motion. That would be time-consuming and wouldn’t really fix the problem. There are lots of things that introduce tolerance errors:

I needed a solution where I can manually square the device, rather than assuming all my parts are printed at perfect sizes, assembled in the same way, and aligned, to account for all these various factors. 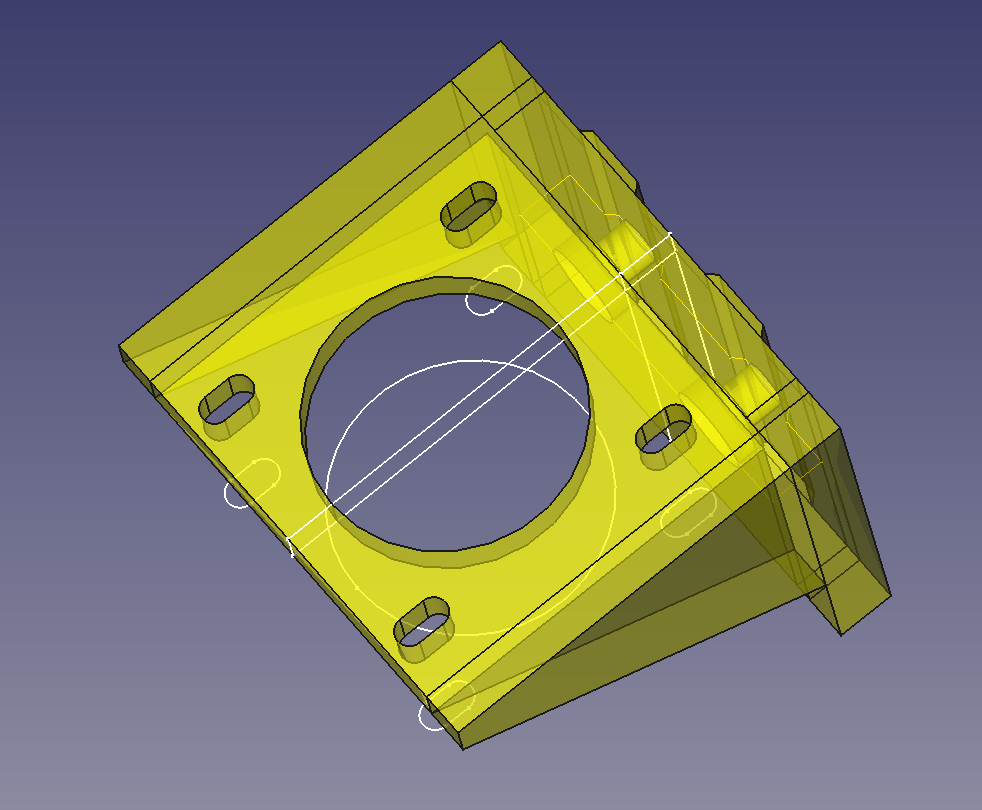 I changed the mounting holes for the stepper motor in slots and came up with a procedure to square the machine. I would do an initial install of the steppers, keep the screws loose, then manually lower the crusher platform as far as it would go. This would move the steppers in to proper alignment and I could tighten them. Then I could do a few manual tests and make sure that I felt the same tension across the range of motion, and slowly lock the screw down.

That introduced the problem that the rod holders I placed on the top of the unit had a strict value that couldn’t be adjusted. And slots don’t make sense because they may need some play on both the X and Y axis’. Looking at my 3D printer for inspiration I noticed that it didn’t really even hold lead screws the lead screws in place at the top. The lead screw holders at the top of the lead screws have several millimeters of clearance and are there to just be there to catch the screws if something goes really, really, really wrong and the machine is falling apart. I decided to borrow that approach.

With all these fixes I was able to go back to running my test script to find appropriate stall current settings. Things were much more reliable. I produced the same values no matter where I was vertically on the device. And the results were reproducable. The downside is that I may need to occasionally re-square the device if it gets a lot of use.

And Back to the Rod Lead Size

Once my new batch of aluminum for the crusher plates arrived I installed it. I haven’t mentioned this before, but I currently have two can crushers. The first one lets me do a lot of rough testing and the second has a more stable configuration. One is the alpha and the other is the beta version of the product.

I upgraded my alpha crusher first. This one still had the fast-yet-less-powerful 8 mm lead screws. It turns out that with all the rigidity in place, and all the changes I made, these were actually much, much better at crushing cans than they were in earlier tests. The slower-more-powerful lead screws on the beta crusher had been extremely slow, maxing out at 8-9 mm per second, and very difficult to dial in the stall settings.

Based on that I decided to go back to the original 8 mm lead screws and use those as I move forward on the project.

I now have a mostly working system but I’m running it via a USB cable on my computer manually. I originally expected to have a high level control computer talking to my low level Pico PCB. This would allow the high-level computer to handle the user interface and more complicated calculations. I’ve decided it’s time to take a first pass at that. My goal get to the point where I have a self-contained unit that can run at the press of a button, and not a CLI script. Then I’ll have my first full version of the entire stand-alone can crusher.